The 27th May 1918 marked the end of Samuel R.D. Maltby’s active service. He, like so many others, became a PoW.

What were his feelings? Was he relieved to still be alive? Was he disappointed at the failure to stop the Germans? Was he scared of what was to happen to him? Rumours about the German treatment of prisoners were rife. Peter Hart in ‘1918 A Very British Victory’ examines the dilemma of surrender:
“Whatever his rank the stigma of capture was something that each man had to deal with in his own way. Many wondered if they could have done more in the final moments before capture.”

As one officer in the DLI put it:
“For myself I only know that it was inevitable and that in similar circumstances I should almost certainly do the same again. It may be a trait of cowardice or merely an unheroic commonsense.”

Samuel Maltby’s surviving army records show that he was listed as missing on 27th May 1918 and also contain a letter from his wife dated 17th June 1918 asking his regiment where he was because she had not heard from him for over a month. 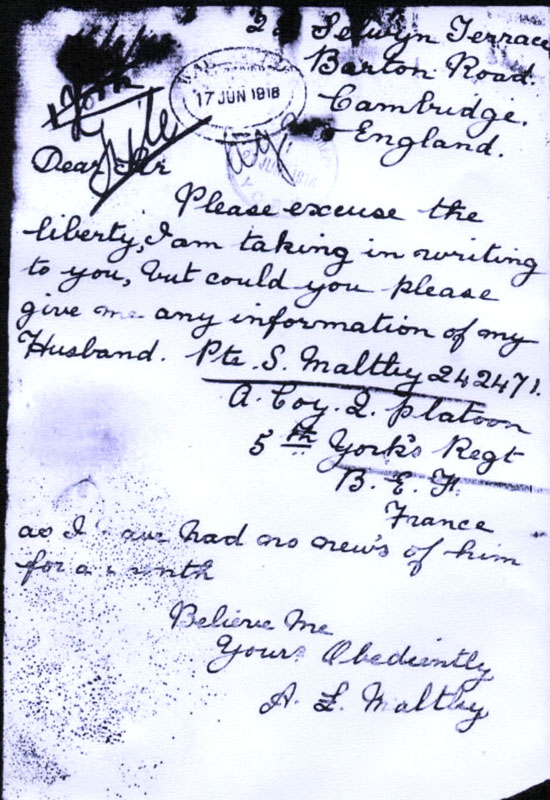 Letter to the Yorkshire Regiment from Mrs. A. Maltby June 1918

The record also tells us that he was repatriated on 19th December 1918 having managed to find his own way home and was then posted to the regimental depot on 21st December. Ironically PoW s came home more quickly than some of the fighting soldiers who had to wait for the slow process of demobilization. The chances of finding out where Samuel was a PoW will be enhanced in 2014 when the ICRC records in Geneva are digitalized. For now we can only assume that he spent seven months of hardship in one of the 167 PoW camps inside Germany. By 1918 there were 175000 other ranks imprisoned, almost 50% of whom had been captured between 21st March and 11th November 1918. With massive food shortages in Germany and riots in the streets, it is not surprising that POW s were underfed.

When Samuel entered the army his medical record of 16th February1914 recorded him as being 20 years 8 months old, 5ft 5 1/4 ins tall, with a chest of 34 inches and fair physical development. When he was repatriated in December 1918 one can imagine that after four years of army rations and seven months of prison food he was not an A1 physical specimen. As a returned prisoner Samuel was entitled to two months leave from the army. The process of demobilizing the vast number of serving troops was intentionally slow to prevent mass unemployment. Samuel was one of the lucky ones because his previous employer, the Cambridge Brick Company, offered him his old job. Thus Samuel was released to employment on 19th January 1919, having relinquished one month of his leave entitlement. However, the Army bureaucracy was slow so that he did not receive his demobilization certificate until 15th February 1919 when he, like many others, was transferred to the army reserve.

For whatever reason Samuel applied for a disability pension but, in May 1920 this was rejected. The final document in his service record is dated October 1921 when, together with the millions who served in the war, Samuel received his Victory and British War medals. The Medal Roll for the Yorkshire Regiment sheet 322 shows Samuel 242471 and his Cousin Frank 242470 together with ten other former Cambridge Regiment men who had served and in some cases died with the 5th Battalion Yorkshire regiment.

So Samuel Richard David Maltby who for 2 1/2 years had served as Private 242471, A Company, no 2 Platoon, 5th Battalion Yorkshire Regiment, the Green Howards returned to civvy street, the brick company and his wife living in Selwyn Terrace, Barton Road, Cambridge.

All I know is that he died aged seventy in 1964 still living in Cambridge. Did he have children? Did he retain any links with his old service pals? Was he in the Territorials in the 1920s? Did he go to see his cousin Frank’s family? Did he suffer from any post war after effects ?

I do know from my grandfather that their mother Sarah never really recovered from Frank’s death and would never take part in Remembrance Day.

As we approach the centenary of the Great War in 2014 more attention will be focused on those who served, fought, endured, survived or gave their lives. As someone who is still researching my relatives in WW1 it is increasingly obvious to me that we can find out so much more about those who died than those who survived. The names of the Glorious Dead are to be found all over the country on war memorials erected in the 1920s by a grateful country. 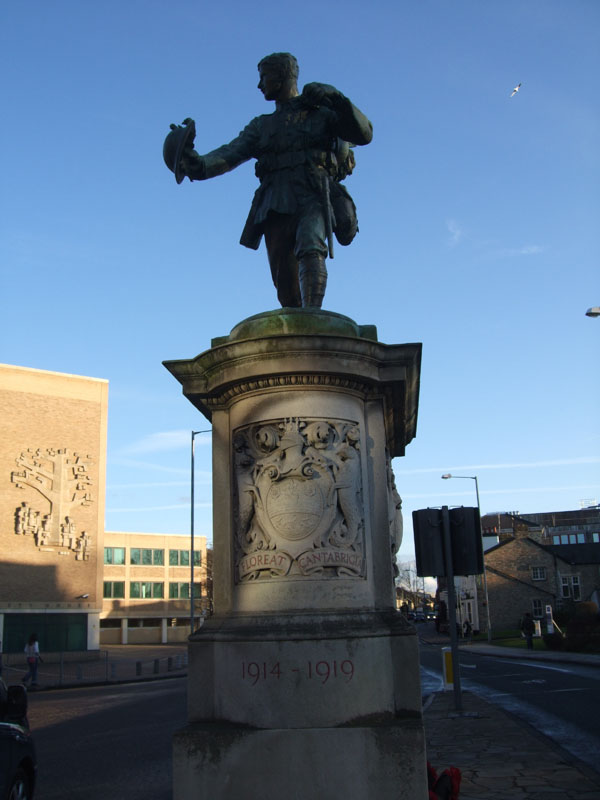 Those who survived are known only to their relatives. The fighting cousins Frank and Samuel are a case in point. Samuel’s name appears only in old War office documents partly destroyed in 1940 and in regimental data bases lovingly put together by people like Cliff Brown. Frank Maltby’s name however lives on in the CWGC Heninel Communal Cemetery Extension. 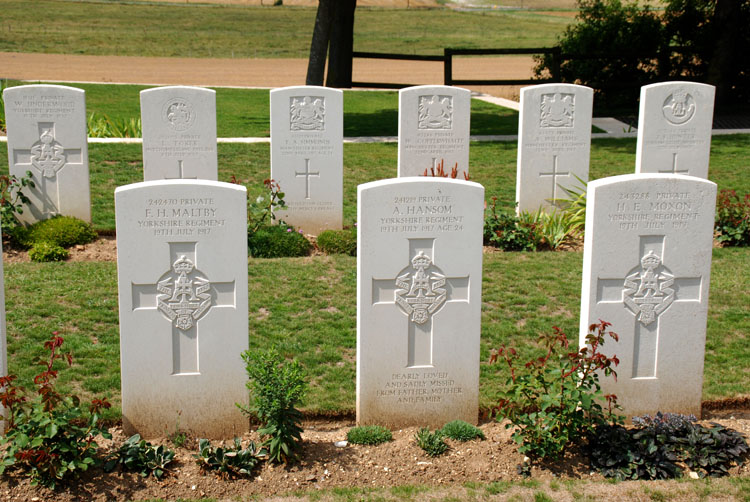 Frank Maltby’s name also lives on in the roll of honour in the Guildhall Cambridge;- 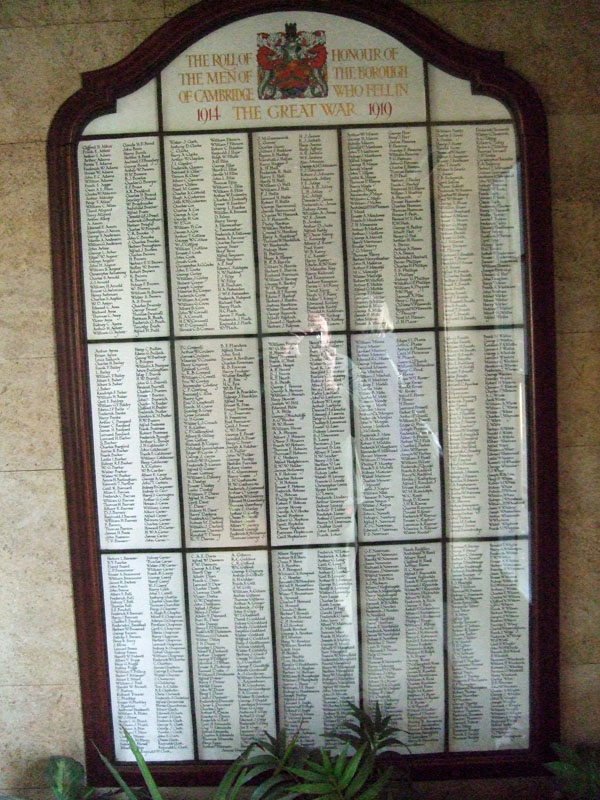 Frank Maltby’s name also lives on in the data base ‘Soldiers Died in the Great War 1914-19’, in the ‘Green Howards’ Gazette Roll of Honour’, on the Yorkshire Regiment WW1 website, on the 4th Battalion Yorkshire Regiment in WW1 website and, most splendidly of all, on the panels in Ely Cathedral commemorating the men of Cambridgeshire who fell in WW1. 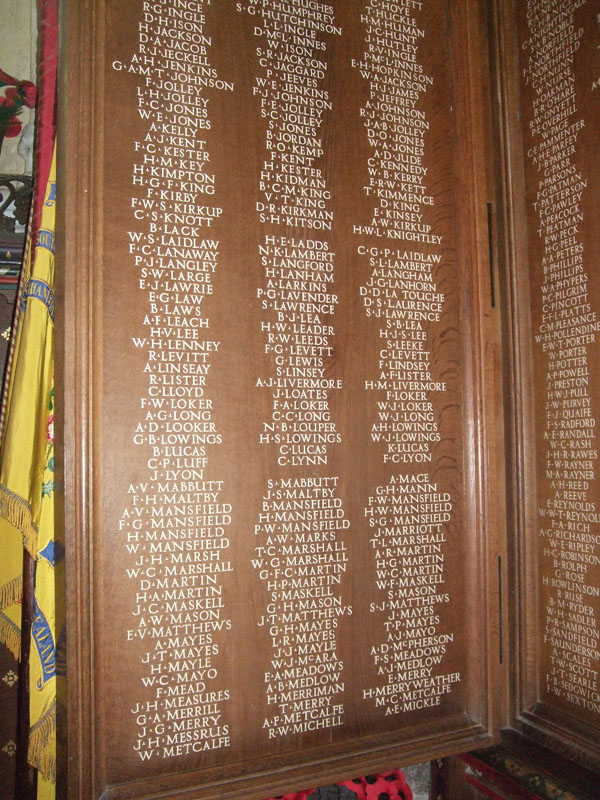 Altogether these are a magnificent tribute to a twenty-one year old butcher’s boy from Cambridge who paid the ultimate sacrifice and who is remembered by his distant relatives with pride.