One of the wounded was Samuel R.D. Maltby 242471 A Company, No 2 Platoon.
His army service records contain details of this, including a letter dated 27th April 1917 from his wife A. Maltby. She had heard from him that he was in no 12 General Hospital, Rouen but she did not know how badly wounded he was. He was obviously wounded in the second attack of 23rd April and went through the well developed chain of medical assistance of Advanced Dressing Station (ADS), Casualty Clearing Station (CCS) probably at Aguez les Duisans NW of Arras (Map ref I 6) and then to one of the base hospitals by train.

He was not sent back to a UK hospital and according to his records he was discharged from Rouen on 12th December 1917 to base depot at ETAPLES (Map ref C 4). Samuel Maltby was out of the fighting but many of his comrades were not so ‘lucky’. In his excellent book ‘CHEERFUL SACRIFICE’ Jonathan Nicholls says:
“The Germans were puzzled by the British plans------ Why were they pressing on with the offensive here ?( Arras ) Again and again British troops advanced only to find themselves caught in a trap ----- On 23rd April the same tactics had caused the downfall of the Yorkshire and Durham Battalions of the 150th Brigade as several battlefield cemeteries near Heninel (Map ref K 6) silently testify.”

He describes how the 4th Battalion Yorkshires were in the first wave of the attack including Captain D. S. HIRSCH who was killed, gaining a posthumous VC and is now commemorated on the Arras Memorial to the Missing together with those others who have no known graves. Those from the 150th Brigade killed on 23rd April can be found in the many Commonwealth War Graves Commission cemeteries in the area: Wancourt British, Rookery, Cherisy Road East, and Heninel Communal Cemetery Extension. The Yorkshire Regiment WW1 website is an excellent source of reference for anyone looking for a particular soldier. 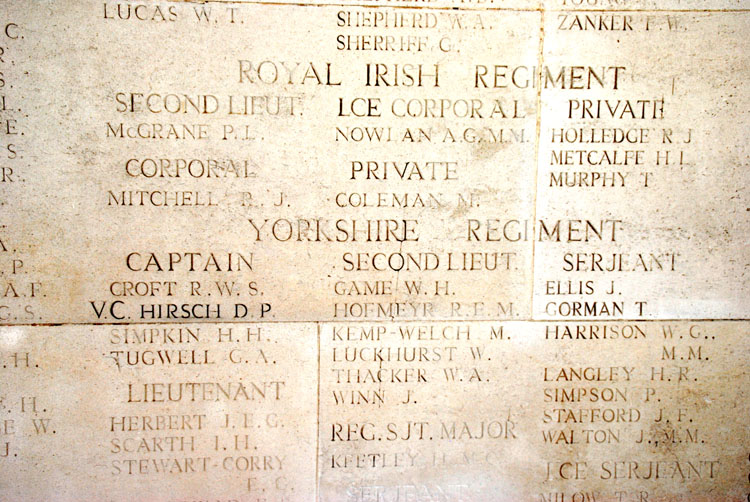 Panel of the Arras Memorial to the Missing