9  GERMAN OFFENSIVE ON THE AISNE 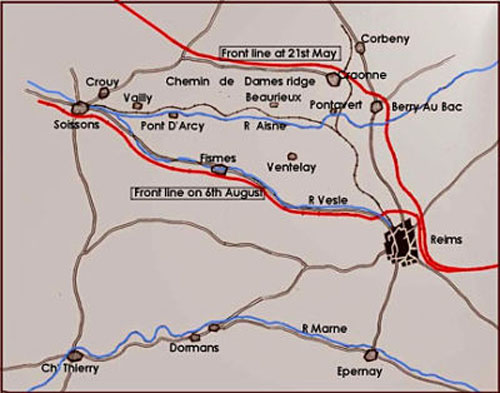 German offensive on the River Aisne May 1918

The peace of this ‘quiet zone’ was shattered on 27th May at 1.00 am with an almighty barrage followed at 4.30 am by an infantry attack.
The 5th Battalion war diary has a whole section detailing this action:
“The bombardment was the heaviest yet experienced and heavy casualties were caused in the forward position on the plateau.”

By 6.30 am the German attacking forces had managed to go around both flanks of the plateau. To quote the war diary:
“The hostile barrage was maintained on the plateau and it is feared that many men were captured in the deep dug outs before they were able to come out.”

By 5.45 am the 5th Battalion command post was surrounded and the 150th Brigade HQ ceased to exist with the Brigade General Rees captured. This desperate situation is told in Peter Hart’s book,‘1918 A Very British Victory’
“Col. Thomson rang up to say that the counter attack he had launched had been swept away and that he was desperately fighting around his headquarters. He was afraid it was hopeless and said ‘I’ll say goodbye General, I’m afraid I shall not see you again.’ Brig .General Rees 150th Brigade 50th Division.”

He was right, in making a run for it, Lt. Col. Thomson was shot by a machine gun near Craonne. He is buried in Vendresse Cemetery and commemorated in his native Yorkshire on the Malton war memorial. (Yorkshire Regiment in WW1 website) Even the 50th Brigade commander, Brig. General Rees could not escape and was captured near Craonne and to his surprise was taken to see Kaiser Bill who said to him:
“My troops made a successful attack. I saw some of your men who have been taken prisoner, they looked as if they had been through a bad hour. Many of them were very young.”
(Peter Hart ‘1918 A Very British Victory’)

“The terrible disaster which befell the infantry of 50th Division on 27th May saw the end of all those gallant battalions which, whenever possible, had put up a stout resistance. But the majority were surrounded and forced to surrender before they could come into action.”

On May 27th in one day alone the 50th Division had 227 officers and 4879 other ranks killed, wounded or captured in a sector that was supposed to be a quiet zone. The Battle of the Aisne was the last operation in WW1 in which the original 50th Division took part. The losses on the Aisne were so great that they could not be replaced and the old battalion identities disappeared for ever. The 50th Division had been caught in all three of Germany’s attempts to end the war in the spring of 1918. 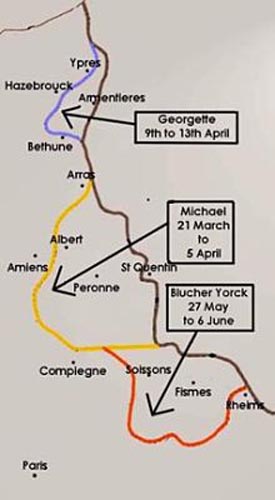 The German offensives of March, April and May 1918