2   TRANSFERRED TO THE YORKSHIRE REGIMENT

The transfer of men from regiment to regiment became more common as the war progressed.

Initially, I contacted the Green Howards Museum in Richmond to ask if they could shed any light on the Cambridge men who were transferred in 1916. However, the museum was totally unaware of this and had no records of the transfer. Therefore I contacted Cliff Brown, chairman of the Cambridgeshire branch of the Western Front Association (WFA) who has created a database of the men who served in the Cambridgeshire Regiment in WW1.

From this he has discovered that one hundred and sixty-one men from the Cambridgeshire Regiment were transferred initially to the 5th (Reserve) Battalion at Catterick camp on 23rd August 1916, then posted to the 5th Battalion Yorkshire Regiment that sailed from Folkestone to Boulogne on 30th August 1916. Later, on 19th September 1916, some of these men were transferred to the 4th Battalion Yorkshires. Both the 4th and 5th Battalions were in the 150th Infantry Brigade and part of the 50th (Northumbrian) Division.

On transfer to the Yorkshires the men were given new four figure service numbers. According to Cliff Brown’s extensive research the 5th Battalion numbers ran from 5119 to 5274; whilst the 4th Battalion ran from 7554 to 7629. Armed with this knowledge, I looked up the Medal index rolls for the Yorkshire Regiment at the National Archives in Kew, and found the names of sixty-three men who had been transferred from the Cambridgeshires to the Yorkshires in August 1916.

However, both Frank and Samuel’s Medal Index cards showed another six figure service number - F H MALTBY 5211/242470, S R D MALTBY 5212/242471. This is explained by the fact that in April 1917 the Army introduced a new six-figure number for those men from the old Territorial Battalions. 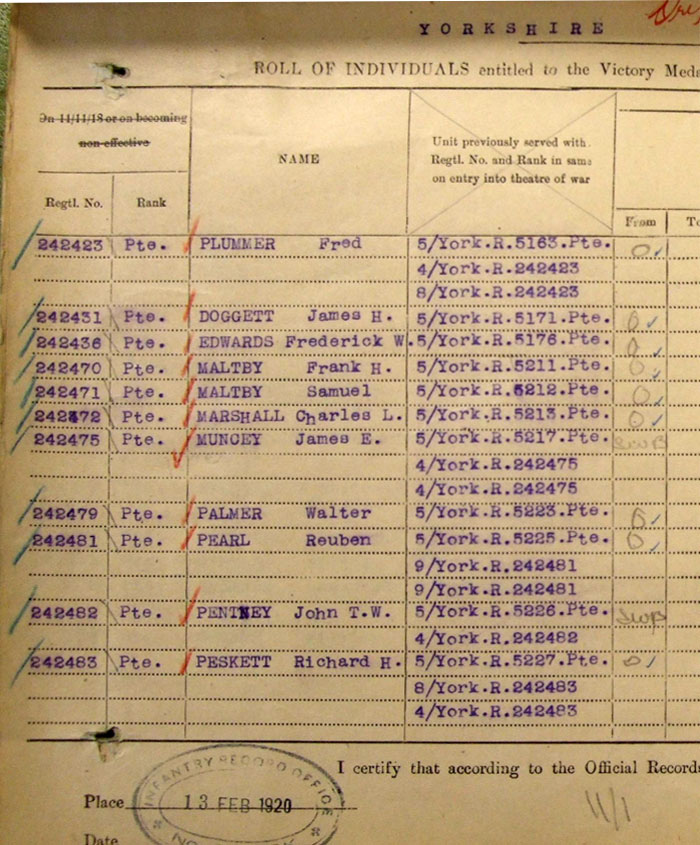