For the remainder of 1916 Frank and Samuel and the 5th Battalion were moved in and out of the front lines that, due to the bad weather, were now becoming swamp-like. They also provided road-mending working parties, an activity that was far from safe because of the constant shelling of the area. However the 150th Brigade were lucky not to be involved in the final, futile phase of the battle of the Somme, the attack on the Butte de Warlencourt, a nondescript hill which, in October and November, cost the lives of many of the 151st and 149th Brigades of the 50th Division. The Butte marked the furthest point of the BEF advance in 1916 and is now owned by the WFA in memory of all who were sacrificed in its capture.

The Divisional Commander General Wilkinson said:
“From 15th September to 30th October you have advanced nearly two miles and have taken seven lines of German trenches. I thank you all for the excellent and cheerful way in which you have undertaken every task put to you.”

The winter of 1916/17 saw the 5th Battalion going from Becourt camp east of Albert (Map ref J 7) to Millencourt camp (Map ref I 7) and then training in Buire sur Ancre (Map ref I 8) before finally in March 1917 arriving in Mirvaux. (Map ref H 7).
The War Diary of any Battalion shows us the amazing distances which the men marched during the war and the 5th Battalion was no exception. By referencing the Michelin Map Local 301 readers can trace the routes for themselves.

The 50th Division history provides a detailed picture of the winter of 1916/17 and comments thus:
“The 50th Division had for the time being turned its back upon the front line the human machine had almost broken down and needed rest and repair.”

The 150th Brigade spent Christmas day and Boxing day out of the lines.
“Christmas day was kept up in style; pigs replacing turkeys and the Battalion band played carols. From home the kind folk of the north sent the men many extras and altogether the festivities were a great success.”

But this respite was short lived. Back in the trenches life was getting worse because of the rain and the mud. One description from the Divisional history provides stark evidence of the conditions that had to be endured.
“We found two men sitting in the mud. Their gum boots had been sucked off by the mud, their feet had gone wrong and they were absolutely done to the world. They went to hospital with trench foot the next day.”

It is estimated that during WW1, 75000 men went to hospital with the condition ‘trench foot’ which, at worst, resulted in amputations.

In the Green Howards Museum in Richmond is an old sepia picture with the heading ‘5th Yorkshire Battalion Morcourt sur Somme March 1917’. 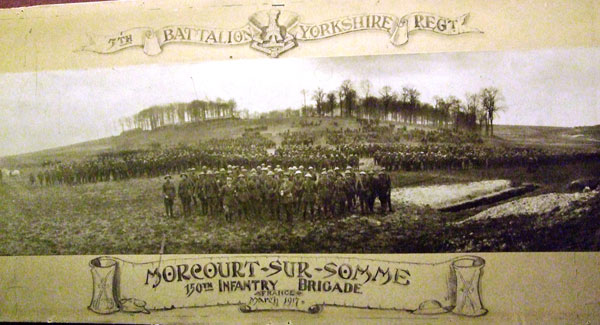 It is obviously behind the battle zone with winter trees and evidence of snow in the hollows. It is a peaceful scene and somewhere in the midst of all those khaki clad figures are the Maltby cousins - Frank and Samuel. How I wish I could pick them out from the crowd ! Are they posing with their A Company chums? What might they be thinking? Are they rested and ready for what was to come? Did they even know what would be next, for it is not clear as to what extent the High Command told the Tommies of future plans. Perhaps it was because ‘careless talk can cost lives’ and certainly much intelligence was gained by raiding each others’ trenches and capturing men and maps.

The picture masks the horrors of war but represents the pride that the men had in their Battalion; for this was the core of the BEF and the organization with which the men associated themselves most. Each Battalion was supposed to be 1000 men, but this was a rare number as this story of the 5th Battalion Yorkshire Regiment (Green Howards) shows. Involvement in major battles and the attrition of trench warfare ground down the numbers so that in some instances during 1918 there were only 200 men still standing.