3  IN THE BATTLE OF THE SOMME

On 9th September the Battalion moved up to the front and occupied Swansea Trench in support of the 149th Brigade around the ruined village of Bazentin le Petit. (Map ref J 7) ‘The Green Howards in the Great War’ – a regimental history - by H.C. WYLLY provides a summary of the 5th Battalion’s activities on the Somme.

At 6.30 am on 15th September 1916, the 4th and 5th Battalions advanced to attack between High Wood and the ruined village of Martinpuish (Map ref J 7) occupied by the enemy. Whilst successfully achieving their objectives, they were heavily shelled before being relieved on 19th September. 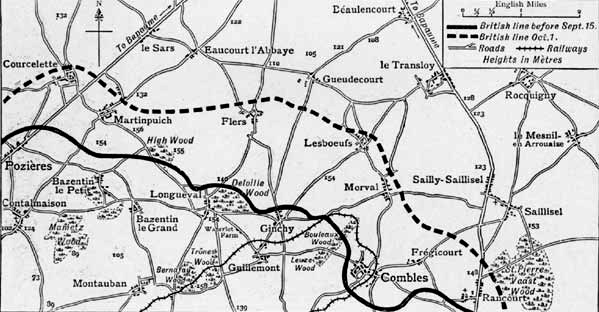 ‘The Fiftieth Division 1914 –1919’ by Everard Wyrall provides a much more detailed analysis of the September campaign. The line taken over by the 50th Division in September 1916 was open to attack on three sides. As Wyrall describes:
“For sheer tragedy wholesale destruction the first vision of the ghastly battlefield (Somme) almost blotted out from one’s mind the memories of the Ypres salient.”
The 150th Infantry Brigade’s objectives were trenches along the high ground East and Southeast of Martinpuish, with High Wood still occupied by the Germans. (Map ref J 7)

The preliminary bombardment commenced on 12th September and lasted for three days so that the Germans had to remain underground to avoid being blown away. The attack on the 15th September was the 50th Division’s first engagement in a set battle that became known as Flers - Courcelette. This was the first time that a so-called ‘creeping barrage’ was used to keep the enemy down in their dug-outs and so prevent a repetition of the slaughter of advancing infantry.

It was also the first use of the new war weapon ‘the tank.’ The 50th division had only two tanks attached to them and as these metal monsters moved towards Martinpuish at 6.18 am they caused many Germans to run away in fear. The 4th and 5th Green Howards took the first objective of HOOK trench and under heavy fire from Martinpuish they moved on to the second objective the STARFISH line which was taken at 9.57 am. Whilst the enemy counter attacked, the Yorkshires held their position, greatly assisted by the 47th London Division’s capture of High Wood. This was at a very high price in losses as can be seen by a visit to the London Cemetery at High Wood.

On 16th and 17th the attack continued on the STARFISH line, but the enemy could not be dislodged from this strong point and both 4th and 5th battalions suffered further casualties. 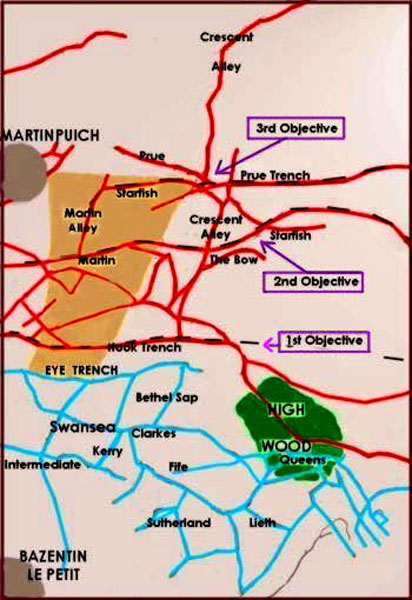 Trenches attacked by the 4th and 5th Green Howards

On the 19th September the 150th Brigade was relieved. The 5th Battalion alone had suffered 252 casualties, including the death of its commanding officer Lt. Col. Mortimer. He, with several of his men, is now buried in Flat Iron Copse Cemetery on the Somme.

The official despatches made reference to the significant contribution of the 50th Division in the battle.
On 25th September the attack was renewed in the battle of Morval designed to push north of Martinpuish. The 5th battalion was back in the STARFISH trench system and on 26th attacked towards Flers (Map ref J 7). This was a night attack and the Battalion got lost but by luck managed to achieve its objective.
On 28th the Battalion was relieved and returned to Marmetz Wood (Map ref J 8). The men from Cambridgeshire had had their baptism of fire and survived it. However, one cannot think that their twenty two months of training in various UK camps had really prepared them for the reality of the war with the intensity of the artillery and the machine-guns. 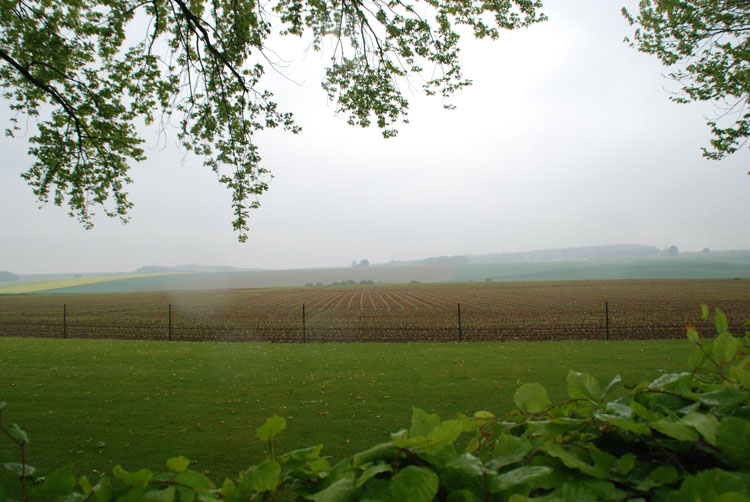