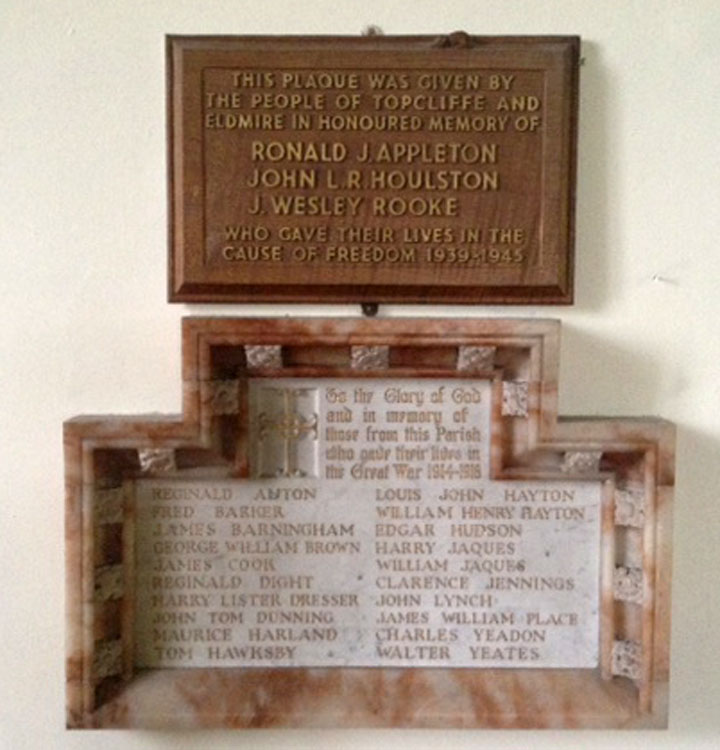 The War Memorial in Topcliffe's St. Columba's Church consists of two plaques, with the memorial to those killed in the Second World War placed above the marble plaque commemorating those who lost their lives in the First World War.

The First World War Memorial is dedicated to;-
"To the Glory of God and in memory of those from this parish who gave their lives in the Great War 1914-1919"

The following names are recorded for the First World War;-

The following names are recorded for the Second World War;-

We are very grateful to Steve Yates <yatessteve42@btinternet.com> for providing information about this memorial. 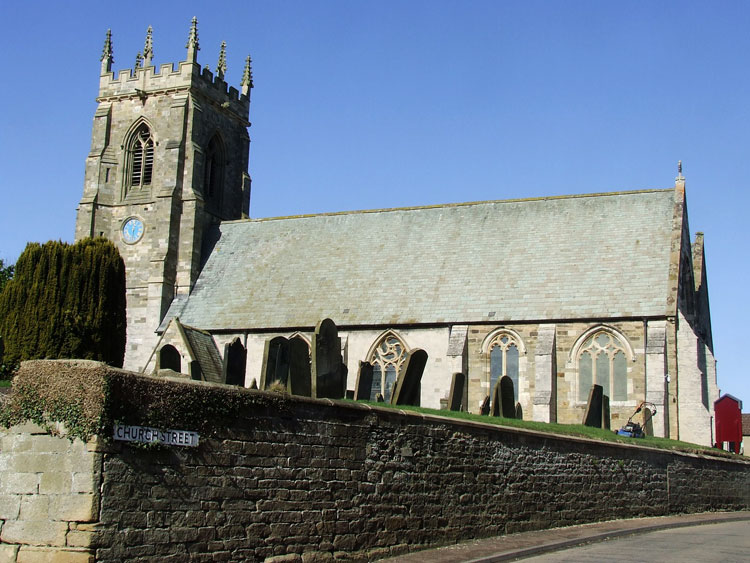 Fred Barker
SACRED TO THE MEMORY OF JANE WIFE OF FREDERICK BARKER OF TOPCLIFFE WHO DIED 21 FEBRUARY 1912 AGED 71 YEARS. ALSO THE ABOVE FREDERICK BARKER WHO DIED 7 NOVEMBER 1912 AGED 87 YEARS. EVER LOVING MEMORY OF FRED BARKER, THE GROVE TOPCLIFFE, ONLY SON OF THE ABOVE AND BELOVED HUSBAND OF ANNIE BARKER WHO DIED FROM HEATSTROKE IN JHELUM, INDIA WHILST SERVING HIS COUNTRY IN THE YORKS REGT ON 20 JULY 1917 IN THE 37TH YEARS OF HIS AGE.
The headstone memorial to Fred Barker is NOT in the churchyard, but in Topcliffe Cemetery. The headstone has been photographed on the Find a Grave website.

John Tom Dunning
IN LOVING MEMORY OF THOMAS DUNNING OF TOPCLIFFE WHO DIED 23 AUGUST 1934 AGED 72. ALSO OF JOHN THOMAS SECOND SON OF THE ABOVE DIED IN FRANCE 25 MARCH 1916 AGED 18 YEARS

Edgar Hudson
IN LOVING MEMORY OF JAMES ROBERT HUDSON OF TOPCLIFFE WHO DIED 16 JUNE 1904 AGED 68 YEARS. ALSO OF EDGAR YOUNGEST SON OF THE ABOVE WHO WAS KILLED IN FRANCE 5 OCTOBER 1918 AGED 34 YEARS/. ALSO ANN BELOVED WIFE OF THE ABOVE JAMES ROBERT HUDSON WHO DIED 20 NOVEMBER 1921 AGED 78 YEARS.
Edgar Hudson's headstone memorial has been photographed on the Find a Grave website.