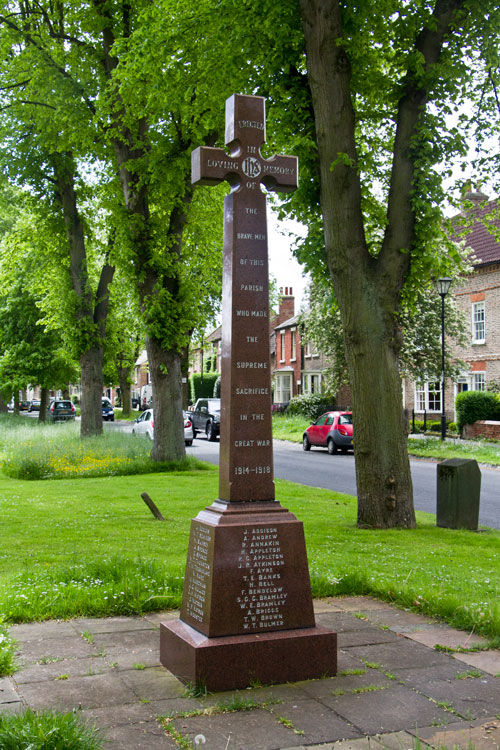 The War Memorial for Sowerby is located on the village green, just to the South of St. Oswald's Church. The memorial is in the form of a cross made out of red granite.

The dedication on the cross is;-
"IN LOVING MEMORY OF THE BRAVE MEN OF THIS PARISH WHO MADE THE SUPREME SACRIFICE IN THE GREAT WAR 1914 - 1918"

The names of the 59 men who lost their lives in the First World War are inscribed on the four faces of the base of the cross.
The names of 18 men who lost their lives in the Second World War are inscribed on the South face of the shaft of the cross.
Biographical details of all of those named on this memorial are provided on the War Memorials in Sowerby, North Yorkshire website. In addition to those named on the Sowerby memorials there are two men of the Yorkshire Regiment associated with Sowerby, but whose names do not appear on a Sowerby memorial, where biographical details are provided.

15 men who served in the Yorkshire Regiment are commemorated on this cross.

The names of men from the Yorkshire Regiment commemorated on the Sowerby War Memorial are;-

Private Edward George Daynes. 32540. 1st Battalion Yorkshire Regiment. Killed 16 January 1917.
Born Horstead (Norfolk), Enlisted Thirsk, Resided Sowerby (Thirsk).
Commemorated on the HOLLYBROOK MEMORIAL, SOUTHAMPTON
(The Hollybrook Memorial commemorates those lost at sea in Home waters who have no known grave, - particularly those returning in hospital ships which were sunk by mines or torpedoes. Some of the names were burials at sea.
The 1st Battalion the Yorkshire Regiment were stationed in India throughout the First World War. Research by Steve Billings has shown that Private Daynes died on his way out to India on the HMT Sierra Leone. The cause of death was cerebro spinal meningitis.) 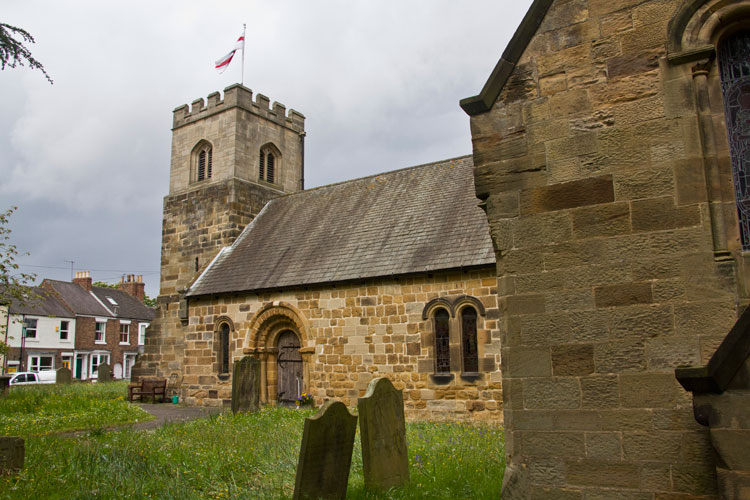 Neil Irving is the webmaster for the War Memorials in Sowerby, North Yorkshire website. The names recorded by Neil Irving are from Sowerby's War Memorial and plaques found in St. Oswald's Church, as well as the Methodist Church. He has provided the following additional information on Private Coope;-

Private Thomas Henry Coope. 25517. 2nd Battalion Duke of Wellington's (West Riding Regiment), formerly 9705 the Yorkshire Regiment. Born New Wotley, Leeds on 15 June 1894. Son of Thomas Coope and Mary Elizabeth (née Cockfield)
of 14 Railway Terrace, Sowerby. Enlisted Thirsk. Before enlisting in the Army he was employed as a locomotive fireman on the North Eastern Railway. He had been home on leave from the Army in May 1918 and had married Marian Owens at St. Oswald's Church, Sowerby on 18 May 1918. He returned to France 25 July 1918 and was killed in action 2 September
1918. Buried Vis-En-Artois British Cemetery, Haucourt, Pas de Calais, France.