The Richmond Grammar School War Memorial on which the names of the Yorkshire Regiment soldiers are commemorated
Select the above image for a larger one which opens in a new window.
Photo : Sophia Mawer (History teacher, Richmond School)

Richmond Grammar School was built on what is now the churchyard of St Mary's Church, which stands opposite to and further up the hill to the former Richmond Lower School Building. In 1677 a new building replaced the Elizabethan one and this was used until 1850 when the school moved into a smaller building which still stands and until 2011 was used for teaching year 7 pupils.

The name of the school from its foundation was Richmond School as it was the only school in the town for a long period of time. In later years it was referred to locally as "The Grammar School" although this was not its official name. Following the merger of the school with the Secondary Modern and the Girls' High School into a single comprehensive school the decision was made to retain the name 'Richmond School' for the new establishment. (source Wikipedia).

The present day Richmond School and Sixth Form College embodies the original Grammar School, and contains the First World War Memorial which commemorates 28 Old Boys who lost their lives in the First World War, Possibly the most notable of these 28 men was Rear Admiral Sir Christopher Cradock who lost his life when his flagship was sunk in the Battle of Coronel in 1914.

Amongst the names commemorated are 10 Officers and men who served with the Yorkshire Regiment.

We are very grateful to Sophia Mawer (History teacher, Richmond School) for photographs of the memorial plaques.

Captain Robert Henry Murray.
11th Battalion Yorkshire Regiment. Killed 7 July 1916. Aged 22.
Buried PHILOSOPHE BRITISH CEMETERY.
(Richard Roberts (<richard.nsw@googlemail.com>) has researched some of Captain Murray's background and states that he was the son of Robert & Sarah Annie Murray. Born 1894 in Richmond, Yorkshire and resided there.
Interactive Ancestry gives Captain Murray's address as "West Cottage", Richmond, and states that at the time of his death he was attached to the Munster Fusiliers.
Captain Murray's service with the Munster Fusliers is also quoted in Soldiers Died in the Great War.)
Robert Henry Murray had been a student at Selwyn College, Cambridge University, entering the college in 1913. 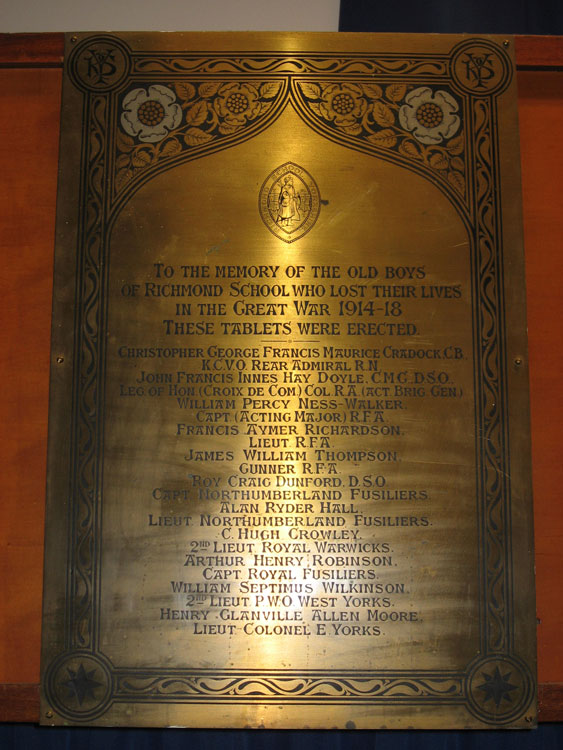 The Richmond Grammar School War Memorial (2)
Select the above image for a larger one which opens in a new window.
Photo : Sophia Mawer (History teacher, Richmond School) 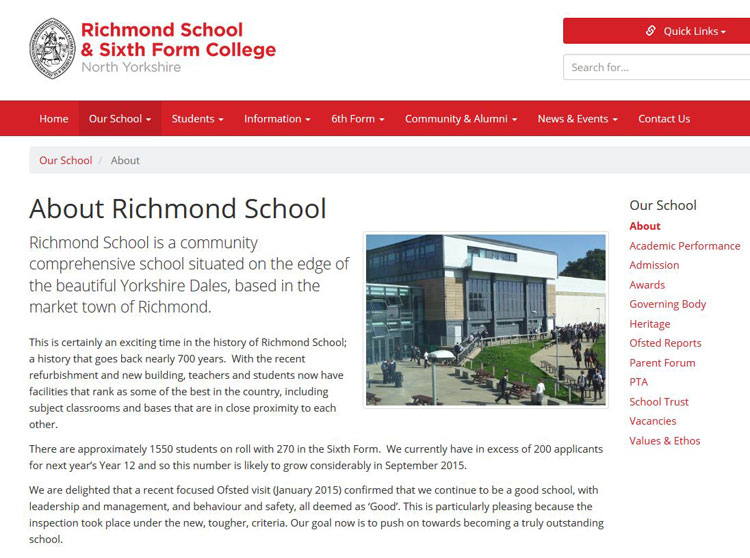 The Home Page for Richmond School