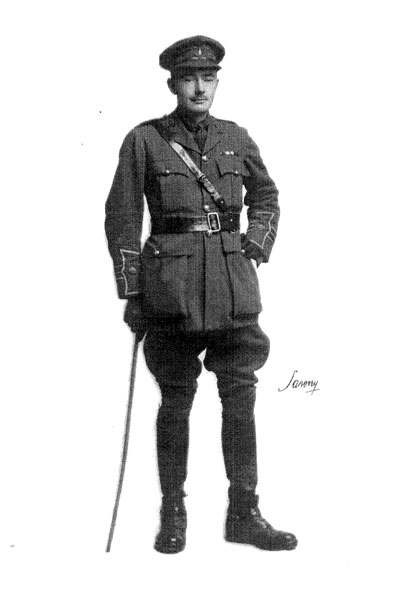 Kaspar Stuart (<kaspar_stuart@hotmail.com>), - great grandson of Major Harold Brown, supplied the above photo and the following information on his great-grandfather (written in September 2010).

"Major Harold Brown was a friend of Lt.Col Sir Mark Sykes and had founded a school for disabled young men before the war. His father, George Brown also gave a house, called the Hollies and its gardens to Leeds City Council in memory of Harold Brown, which is now an old peoples home. His daughter-in-law (may grandmother) is still with us and will be 100 in November. She now lives with me in Paris. The last of Harold Brown's four children to still be living, who vividly remembered their father and those times was his daughter Elizabeth who died in America in 2000. "

The information below was gathered by the Beck isle Museum in Pickering as part of its Great War Project;-

Acting Major Harold Brown was born in Bournemouth on 4th January 1879 into a fairly wealthy middle class family, but as he grew up decided to head north (via Cambridge University) and eventually ended up with his wife Dorothy in Filey, where they lived at Linkfield, 61 West Ave. Unfortunately, very little of his civilian and social life is known but an excellent record of his life in the military has been recovered by Rodger Dowson, to whom I am very grateful for allowing me to view his research and efforts.