Simon Barnard (<sb@simonbarnard.wanadoo.co.uk>), a great nephew of Captain H N Constantine, has provided much information on his great uncle and his two brothers. This information, and the photographs provided by Simon, are shown below.

At the time of the outbreak of the First World War, the Constantine Family were a well known family from Middlesbrough who were involved with shipping. The family name became permanently associated with Teesside through their sponsorship of the Constantine Technical College in Middlesbrough, - with the College subsequently becoming the University of Teesside.

In 1916 Joseph Constantine, the father of the three Constantine brothers who fought with the Yorkshire Regiment, donated £40,000 in order to build a college that would replace the old Middlesbrough Mechanics Institute. However, only after doubling this donation by the Constantine family in 1924 did things begin to happen. The actual construction of the college started in 1927, and the official opening of Constantine Technical College was on 2 July 1930.

Constantine Technical College was formally opened by the Prince of Wales, the future King Edward VIII.

The two surviving Constantine brothers were at the opening. An official photograph of those attending the opening ceremony is shown below. To see a large version of the photo, complete with the names of those shown, simply click on the thumbnail image. 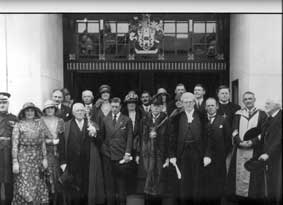