North Ormesby Cemetery is immediately adjacent to south side of North Ormesby St Joseph's RC Cemetery that is situated at the corner of the Trunk Road, A1085, and Ormesby Road at the opposite corner of what used to be the White House Garage [there is street parking nearby]. There is no wall now between the two cemeteries.

Ray Wilkins (<e2ray3636@ntlworld.com>) has produced a report into the graves in North Ormesby's combined cemeteries, and anybody interested in locating a War Grave in this cemetery is recommended to read this report. The report can be obtained by selecting the link below.

In addition, Ray has produced a map of all the War Graves in the combined North Ormesby cemeteries, where the position of a grave can be located against a man's name. To select this map, select the link below.

There are 10 Commonwealth War Graves belonging to men of the Yorkshire Regiment in Middlesbrough's North Ormesby Cemetery. Details of those buried are below.

Ray Wilkins (<e2ray3636@ntlworld.com>) has additionally photographed a derelict family headstone that is a memorial to Lance Serjeant Charles Edward Bendelow, Lance Corporal James Rymer and Serjeant Robert Rymer. The connection between these three men is that Charles Bendelow was married to Eliza Bendelow (nee Rymer); the other two men were Eliza's brothers. Thus Eliza will have lost not only a husband, but her two brothers as a consequence of the War. A real tragedy.

Photographs of the graves have been taken by Stan Grosvenor (<csstan@mametz.fsnet.co.uk>), Ray Wilkins (<e2ray3636@ntlworld.com>) and Sandra Gallacher (<sgallacher16@virginmedia.com>). For a larger sized image of a grave, where available, simply select the thumbnail for a larger sized photo to open in a new window. Click anywhere in the window that opens to close it.

Photo by Sandra Gallacher (<sgallacher16@virginmedia.com>).
For a larger sized image which opens in a new window, select the thumbnail on the left. 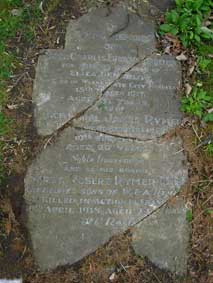 Walkergate City Hospital was in Newcastle and was used in the First World War for the treatment of wounded soldiers.