Llanwnda (St Gwyndaf) Churchyard, Caernarvonshire, contains 4 burials from both World Wars, - 3 from the First World War and 1 from the Second World War.

One burial is that of a soldier who served with the Yorkshire Regiment. This soldier, an Officer, is buried in a family grave and is commemorated on that monument.

We are very grateful to Richard Roberts (<richard.nsw@googlemail.com>)for the photographs of the grave and the church. 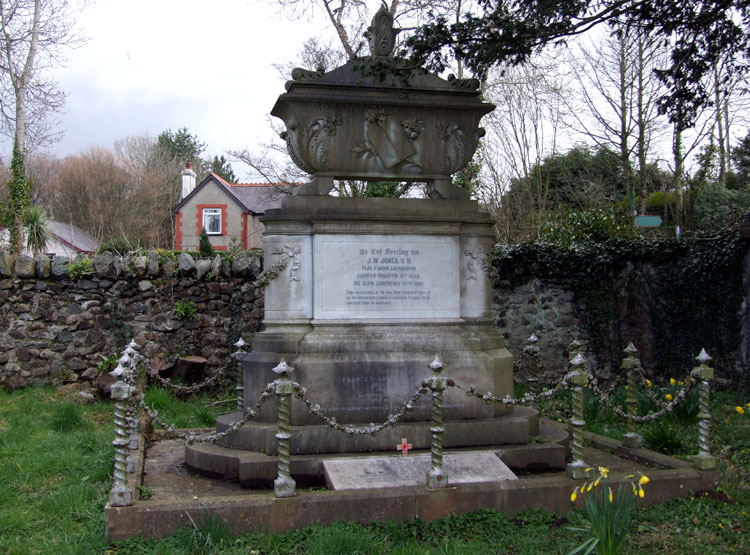 Information on Captain Lloyd-Jones from Bob Coulson's Biographies of Officers of the Yorkshire Regiment.

A Londoner, John Lloyd-Jones was born in the capital on June 1st 1891 and in 1910 attended Emmanuel College at Cambridge.
He went to France in October of 1914 serving in the ranks of the Artists Rifles and was then commissioned in March 1915, joining the 2nd battalion in time for the Battle of Neuve Chapelle.
He fought in the early 1915 actions at Festubert and Givenchy where he was wounded in action and on one occasion,
“3 snipers had caused casualties and Lt Lloyd-Jones crawled up, bomb in hand and hurled his grenade killing two and blowing the hand off the other”.
He was promoted to Lieutenant after this action on June 18th 1915.
On home leave the following year, Lt John Lloyd-Jones died of septic pneumonia and pleurisy at Colwyn Bay in North Wales on March 11th 1916 aged 25.
His grave today can be seen in Llanwnda, St Gwyndaf Churchyard to the south west of Caernarvon.
Lt Jones was the son of Mr J W Jones of Holloway in London.
(The date of promotion to Captain is not found).

John Lloyd-Jones was living at Ingleside in Colwyn Bay when he died. He was a wealthy young man. He had effects of £30,412 (about £1,800,000 in today's money) which he left to his sister Edith Annie Lloyd Jones and Capt Arthur Stanley Davies (thought to have served with the Royal Welsh Fusiliers and survived the war). His father John W Jones, who died in 1898, made his fortune as a silk mercer. The family money explains the impressive monument in a small country churchyard! Frances Annie his mother, who died in 1909, was a Lloyd before she married so it is debatable whether his name should be hyphenated as Lloyd was given to him and his sister as a middle name.

John Lloyd-Jones is mentioned on the following website pages, which mention that he went to Uppingham School and was a solicitor (or training to be one) and a member of Rosslyn Park RFC. His name is commemorated on the Rosslyn Park RFC Club's new WW1 war memorial unveiled a year ago. 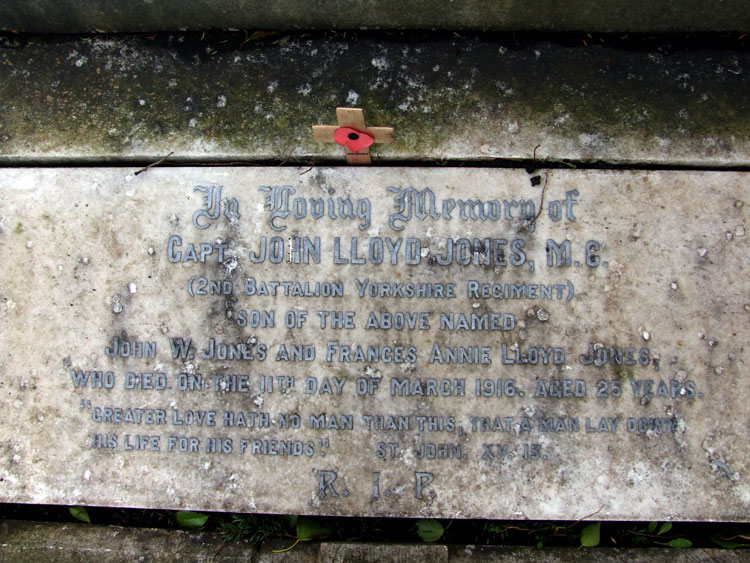 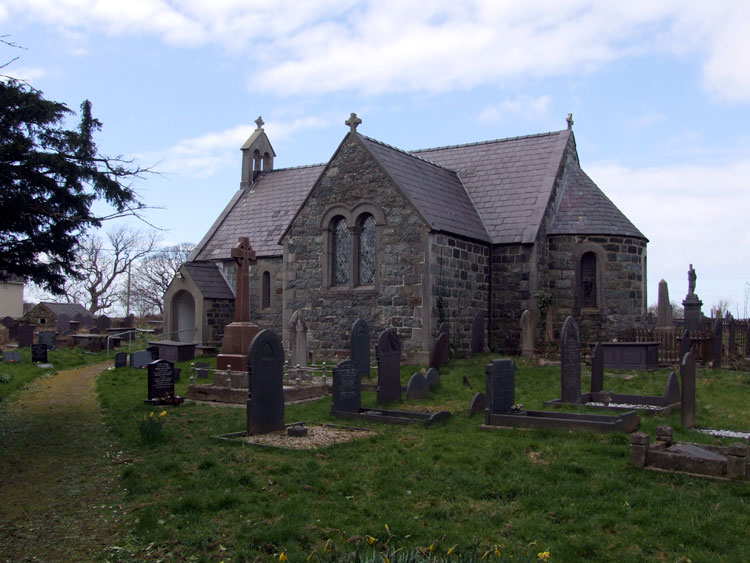