During the First World War, the major hospitals in Leeds were the 2nd Northern General with 1,800 beds and the East Leeds War Hospital with 1,900 beds. Leeds was also one of the principal hospital centres in Yorkshire during the Second World War.

The Leeds Roman Catholic Cemetery, Killingbeck, contains the scattered graves of 70 First World War casualties, most of whom have their names recorded on a centrally positioned Screen Wall as the graves could not be marked individually. The Second World War burials also number 70, 21 of them grouped together in section BV. The rest are scattered and a further 16 names were added to the Screen Wall commemorating those whose graves could not be marked.

Four soldiers who served with the Yorkshire Regiment are commemorated on the Screen Wall (and are thus also buried in the cemetery). There is also one soldier who served with the Yorkshire Regiment who is buried in the cemetery whose name does not appear on the Screen Wall, and who is buried in a common grave. Steps are being taken to have this soldier commemorated by the Commonwealth War Graves Commission.

A further soldier of the Yorkshire Regiment is buried in an unmarked grave in the cemetery, and, as yet, is not shown on the Commonwealth War Graves Commission register (and is therefore not shown on the Screen Wall).

The photo below shows the Screen Wall, and below that are details of the Yorkshire Regiment soldiers buried in the cemetery. At the bottom of the page are two general photos of the cemetery. 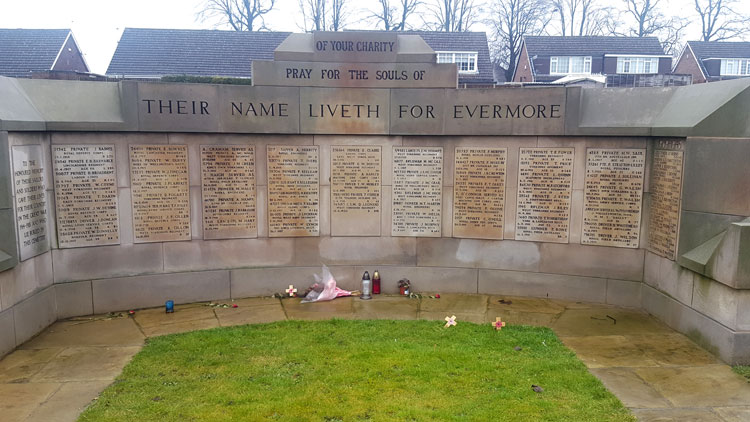 The Screen Wall in Killingbeck Cemetery
Select the above image for a larger version which opens in a new window.
Photo © Copyright Wayne Bywater (<waynetyke123@aol.com>)

The following soldier is not shown on the screen wall, though he is to be found in a common grave.

Private John Upton. TR/5/39480. 15th Battalion the Yorkshire Regiment. Son of Sarah Upton, of Leeds. Died at home 6 November 1917. Aged 18.
Born Lewes, Enlisted Leeds.
Private Upton died in the Borough Isolation Hospital, Ipswich, of Pneumonia and Meningitis.
Michael Bartle (<mick455@msn.com>) provided Richard Roberts (<richard.nsw@googlemail.com>) with the following information on John Upton's grave;-
"John Upton is buried in a common grave in the Killingbeck Cemetery with 12 other unrelated people. Died 6 November 1917
Buried 12 November 1917. Grave plot: BB4. Abode given as 24 Vinery Street which I presume is his family address in the East End Park/Richmond Hill area of Leeds. There are 9 other Upton's buried in Killingbeck but no family grave."
Michael Bartle subsequently provided a photo of the common grave headstone, which is shown below.

The following soldier is not shown on the screen wall. Although his burial plot is known (Section BA Grave 161) there is no grave marker.

The following information on the above soldier was obtained by Richard Roberts (<richard.nsw@googlemail.com>);-
"Terry Denham let me know that Thomas Riley died at the Township Infirmary, Leeds and lived at 2 West Yard, Leeds. He died on 1/8/1918 aged 54. I also made contact through a website called Secret Leeds with a Rowena Riley who has access to most burial records for the Leeds area. She managed to find him buried at Killingbeck Cemetery in Section BA Grave 161. I then got in touch with the Cemetery Superintendent, who confirmed that he was buried there on 5/8/1918 but, unfortunately, the grave is not marked with a headstone." 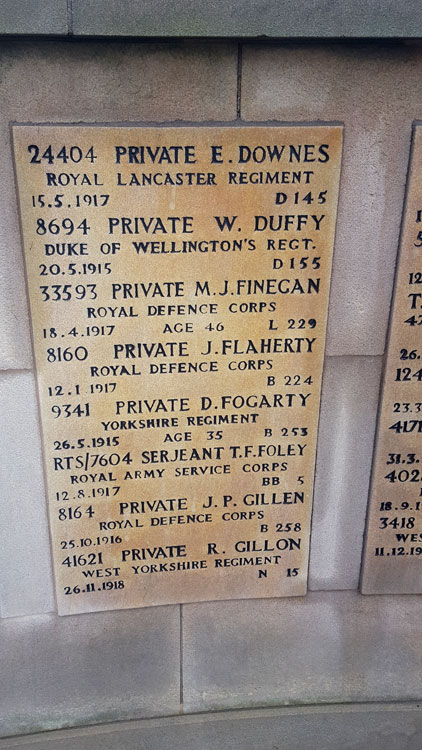 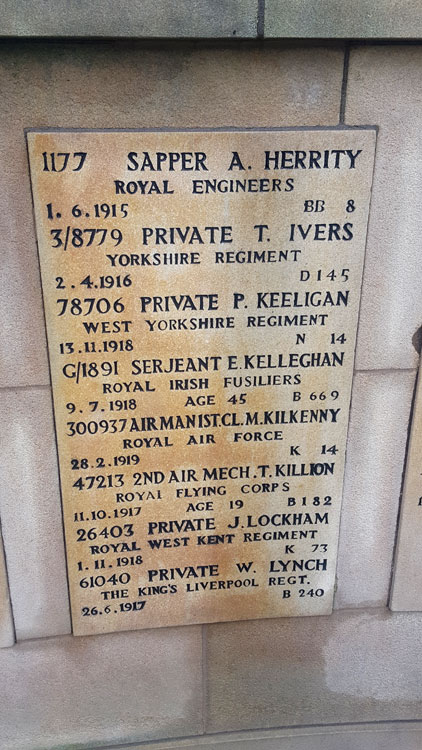 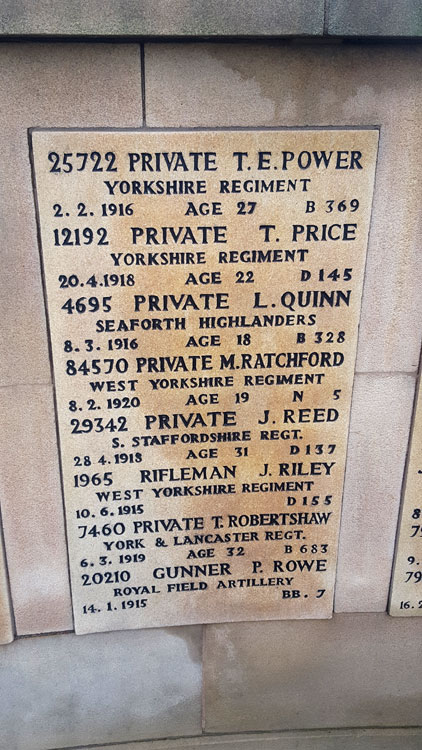 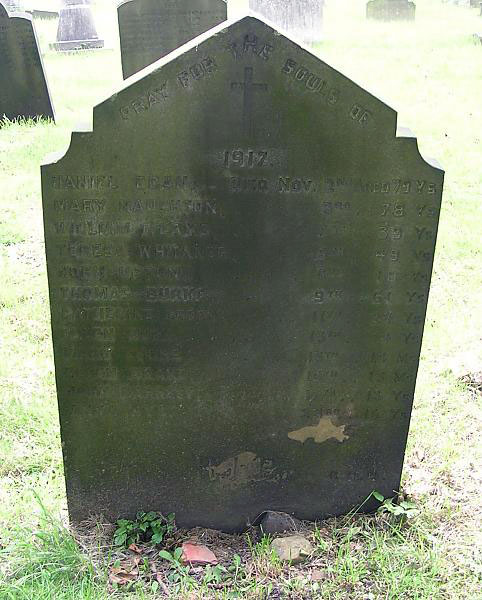 The Common Burial Plot headstone for the 9 Burials in November 1917. John Upton's name is 5th Down.
Photo Mick Bartle (<mick455@msn.com>) 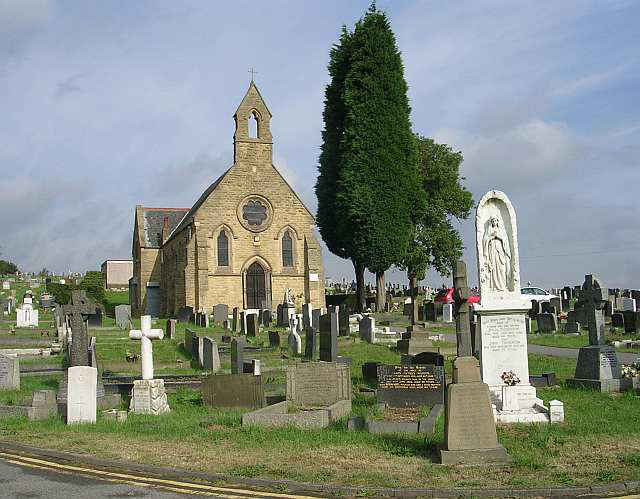 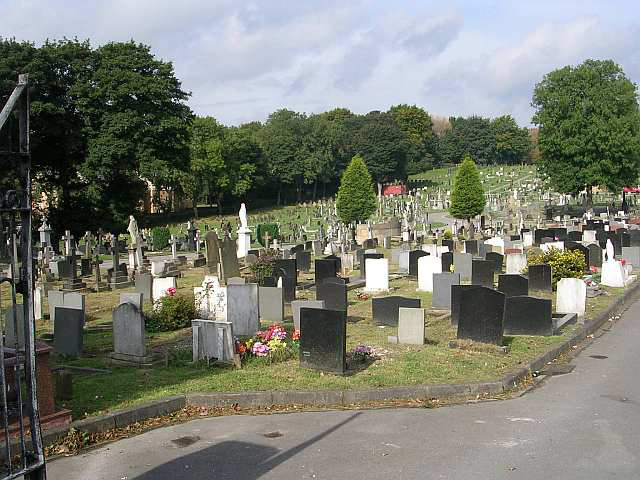