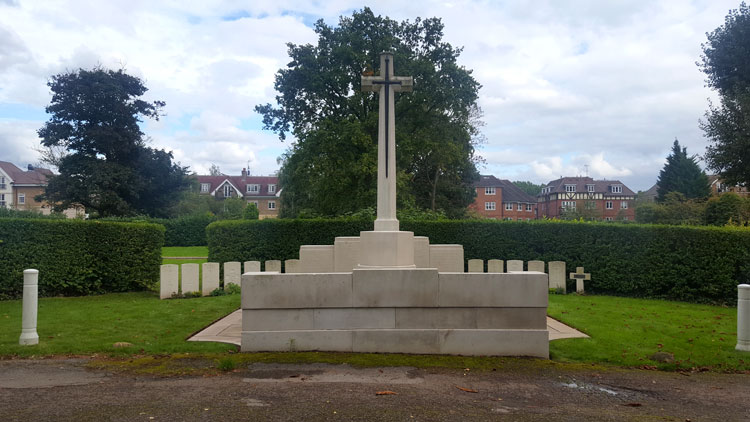 There are 69 Commonwealth burials of the 1914-1918 war and 156 of the 1939-1945 war in Hendon Cemetery and Crematorium. Those whose graves are not marked by headstones are named on 2 Screen Wall memorials close the Cross of Sacrifice. There are an additional 14 casualties of the 1939-1945 war named on the Screen Wall panels who were cremated in the adjoining crematorium. There are 2 Non-Commonwealth service burials and 1 Non-World War burial in the care of C.W.G.C. here.

One soldier of the Yorkshire Regiment is commemorated in the small plot behind the Cross of Sacrifice. However, although there is a headstone (4th from left) for this soldier, a marker stone states "1914 - 1918 THE SOLDIERS AND AIRMEN WHOSE NAMES ARE INSCRIBED ON THESE STONES LIE BURIED ELSEWHERE IN THIS CEMETERY".

We are very grateful to waynetyke123 (<waynetyke123@aol.com>) for the photos from this cemetery.

Click on the thumbnail of an image below for a larger version of the photo which opens in a new window.