Fort George is a fortress on the east coast of Guernsey in the southern vicinity of St. Peter Port. The cemetery is War Department property and contains 25 war graves of both world wars.

Amongst the graves is that of the first soldier of the Yorkshire Regiment to die in the First World War, and to be buried in a Commonwealth War Grave. At the outbreak of the First World War, this soldier was serving with the 2nd Battalion, who were garrisoned in Guernsey at the time. 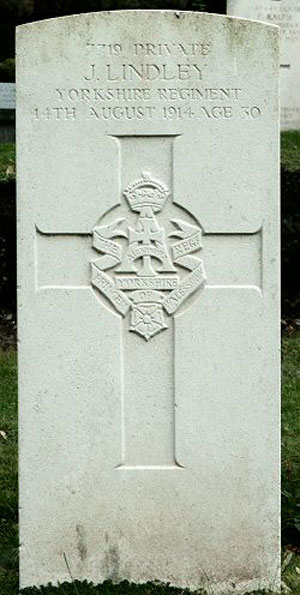 Photo from "The Channel Islands and the Great War"

A newspaper article reproduced on the website "The Channel Islands and the Great War" stated that Private Lindley was found drowned in the Albert Dock, Guernsey. He had apparently fallen into the harbour at low tide, at 5.30 in the morning, and had hit his head on rocks in the harbour bottom. The fall height was about 25 ft.

Fort George Cemetery, Guernsey
Photo from "The Channel Islands and the Great War"