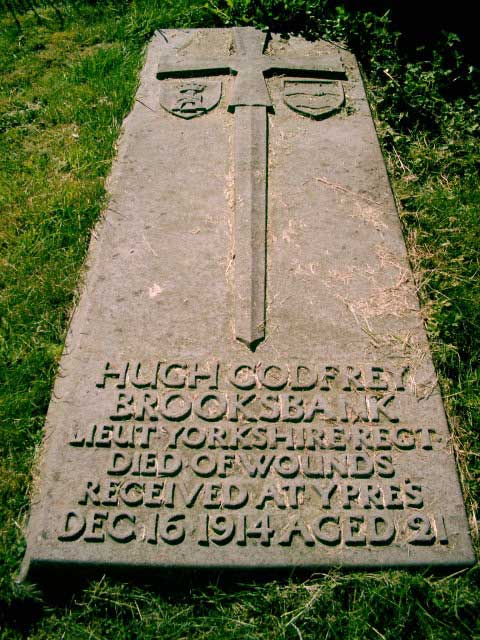 The grave of Lieutenant Hugh Godfrey Brooksbank in the churchyard at Healaugh
(photo : Dave Morris <brem1234@hotmail.com>)

Born at Healaugh, Old Hall, Tadcaster. 24th November, 1893.
3rd son of Sir Edward Clitheroe Brooksbank, Bart., of Healaugh, Old Hall.
2nd Lieut., 5th February, 1913 ; Lieut., 31st October, 1914.
Went to Belgium with 2nd Battn. in October, 1914, and was severely wounded near Ypres on 1st November (twice mentioned in despatches).
Died of his wounds at 26 Park Lane, London, 16th December, 1914.
A senior officer wrote of him : "A braver lad never stepped the earth ; he was left in command of 'B' Company when all his seniors had been shot. He commanded it like a veteran, and on two occasions he was largely responsible for the regiment being saved."
"His comrades will miss him sadly and an older generation will recall the loss we sustained in the death of his uncle, William Stafford Brooksbank, who died of small pox at Bangalore. 18th June, 1891, while Adjutant of the same battalion" (G.H.G.).

Dave Morris provides the additional information;-
"Hugh's father was a huge landowner around Tadcaster, and was instrumental in erecting the memorial for Tadcaster. I believe he funded the majority of the cost, and was the man who unveiled the memorial in 1922. "

Dave Morris runs a very comprehensive website for War Memorials in the Tadcaster area, - http://www.tadcaster-ww1-memorials.com/, and this includes a page for Healaugh, where further information on the Brooksbank brothers can be found. 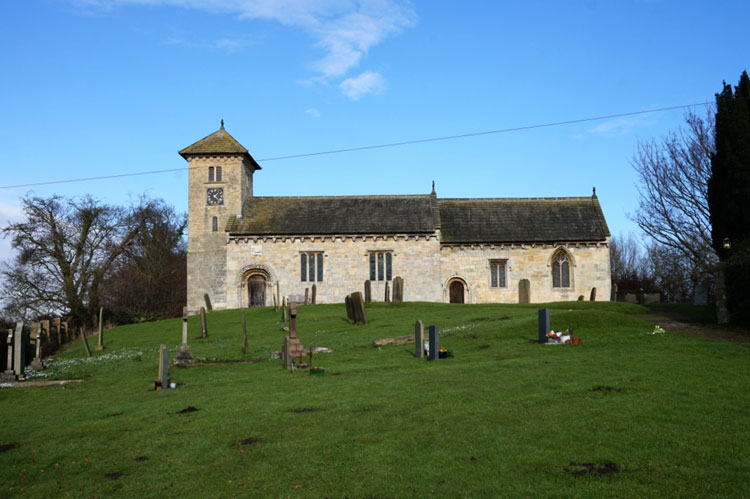 The Church of St. John the Baptist, Healaugh
Photo © Copyright Ian S and licensed for reuse under this Creative Commons Licence.