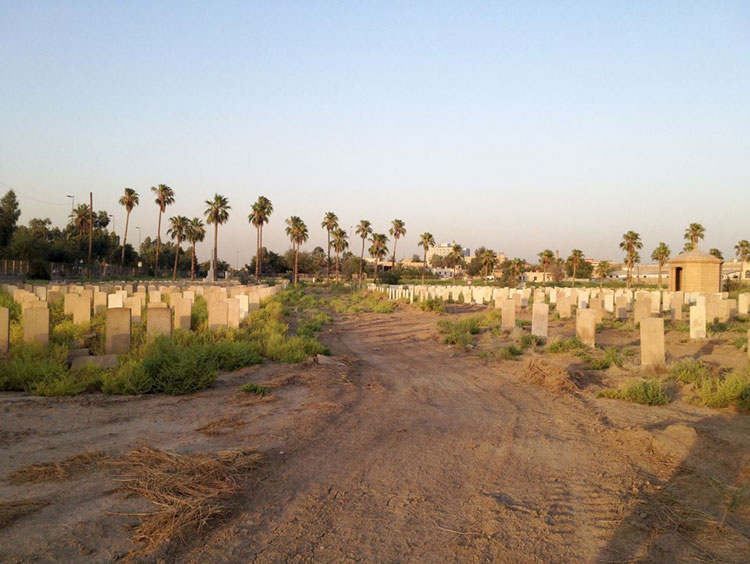 Baghdad (North Gate) War Cemetery is located in a very sensitive area in the Waziriah Area of the Al-Russafa district of Baghdad. The main entrance to the cemetery is located opposite the College of Arts and the Institute of Administration in Baghdad University and adjacent to the Iraqi Cigarette Factory in Waziriah Area and the Press of Ministry of Defence.

In 1914, Baghdad was the headquarters of the Turkish Army in Mesopotamia. It was the ultimate objective of the Indian Expeditionary Force 'D' and the goal of the force besieged and captured at Kut in 1916. The city finally fell in March 1917, but the position was not fully consolidated until the end of April. Nevertheless, it had by that time become the Expeditionary Force's advanced base, with two stationary hospitals and three casualty clearing stations.

The North Gate Cemetery was begun In April 1917 and has been greatly enlarged since the end of the First World War by graves brought in from other burial grounds in Baghdad and northern Iraq, and from battlefields and cemeteries in Anatolia where Commonwealth prisoners of war were buried by the Turks.

At present, 4,160 Commonwealth casualties of the First World War are commemorated by name in the cemetery, many of them on special memorials. Unidentified burials from this period number 2,729.

The cemetery also contains the grave of Lieutenant General Sir Stanley Maude, Commander-in-Chief of the Mesopotamian Expeditionary Force, who died at Baghdad in November 1917 and the memorial to the 13th Division which he commanded. A memorial to the 6th Battalion Loyal (North Lancashire) Regiment was brought into the cemetery from the banks of the Diyala River in 1947.

During the Second World War, Baghdad was again an objective of Commonwealth forces. The 20th Indian Infantry Brigade reached the city from Shaiba by the Euphrates route on 12 June 1941 and the 21st Indian Infantry Brigade, part of the 13th Duke of Connaught's Own Lancers, together with the 157th Field Regiment, Royal Artillery, arrived on 19 June via the Tigris. An advanced base was established later near the city and remained in use until 1946.

Most of the 296 Commonwealth servicemen of the Second World War buried in the cemetery died of illness or by accident when serving with PAIFORCE. Again, a number of the graves were brought in from other burial grounds.

Within the cemetery is the Baghdad (North Gate) (Khanaqin) Memorial, commemorating 104 Commonwealth servicemen, 437 Polish soldiers and 3 Arab Legionnaires of the Second World War buried in Khanaqin War Cemetery which, owing to difficulty of access, could not be properly maintained.

The North Gate Cemetery also contains 127 war graves of other nationalities from both wars, 100 of them Turkish, and 41 non-war graves.

4 soldiers who served with the Yorkshire Regiment are buried in this cemetery.

Major Joseph Edward Barlow, DSO MC. 3rd Battalion the Yorkshire Regiment, attd. Indian Political Department. Died 3 June 1920. Aged 25.
Major Barlow was the son of a Mrs A Barlow, and was born on 27 December 1894 in Heswall (Ref : Attestation Paper)
He joined Princess Patricia's Canadian Light Infantry as a Private (No 1640) in August 1914 in Canada, and was struck off strength on 22 January 1915.
He joined the 3rd Battalion Yorkshire Regiment, but his Medal Rolls Index card shows him as having first served in France on 15 January 1915. (Therefore, possibly he was with the Canadians, initially, in France).
Date of joining the 3rd Battalion not given.
He was awarded the Military Cross in late 1916, and his citation for the DSO was dated 14 August 1917.
At the time he was awarded the DSO he was a Temporary Captain attached to the York and Lancaster Regiment.
He was attached to the India Political Department at the time of his death.
His medals were to be sent to "3 Harbour Cottage, Bosham, Nr Chichester". (to his wife, May Barlow?)